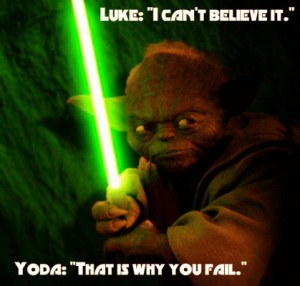 In Hebrews 11:1 in the bible it says “Now faith is the substance of things hoped for, the evidence of things not seen.”

Now I have never met Yoda in real life and I am not going to say that I believe that Yoda exists, but the idea contained in the picture to the left is something I do believe in. So the question comes to mind what is belief?