Idaho became a state on July 3rd, 1890. Idaho has peculiar history on how it became a state and even more so on how Boise became it’s capitol. US history in Idaho starts with Lewis and Clark passing through the territory now known as Idaho in 1805. There was a bit of controversy with the ownership of the territory as both the United States and the United Kingdom both had claims on the area, though in 1846 the dispute was officially ended with the Oregon treaty, which made Idaho part of Oregon. But then, in 1848 Washington, Montana, and Wyoming got in a land battle with Oregon and started to declare Idaho as their own. This went on until 1853 when apparently Washington won and Idaho became part of Washington. Then gold was discovered in 1860 and Idaho was like “yeah right Washington, as if we are going to share with you!” Washington did not agree but Idaho means “land of many waters” and since Washington gets too much rain anyhow they let Idaho become it’s own territory in 1863 with Lewiston as it’s capitol. It is said that Abraham Lincoln had to personally intervene to make this happen, not sure if it is true but they have a lot of Lincoln stuff in the Idaho Capitol basement, and let’s face it, who doesn’t like Lincoln?!

That was all cool but the first territorial Governor, William Wallace took too to long to get to the capitol (Lewiston) and so another guy name named Caleb Lyon was named in his place. He was smarter than Wallace and he was like “forget going to Lewiston, I am from Boise, so the capitol is now in Boise.” The citizen’s of Idaho were like “Wait, what did you just say?!” and Lyon left the state so that he didn’t have to go to court on the matter. So that left Idaho with a guy named Clinton DeWhitt Smith who was appointed, but the stress of the job got to him and in seven months he literally killed himself by drinking on the job. So a guy named H.C. Gibson came along and revived the government long enough to “loan” himself the enter territorial treasury of $41,062. Meanwhile, Caleb Lyon, who previously left showed up again and said that he was still Governor and then walked away again, but this time he took with him $46,418.40 in Indian Affairs money that was allocated to the the Indian territories (and then he complained when said Indians tried to kill him). It was about this time a group of Idahoans were like “Enough!” so they went to California, used the printing presses in San Francisco, published a constitution and voted them all out by becoming a state (except the dead guy, he remained dead).

Today Idaho has a lot less controversy. Known as the “Gem State,” there are many mining operations in the state, but it is also known as the “Potato Capitol” due to the fact that 1/3 of all the potatoes consumed in the United States are grown within the state. Less known is that Idaho is also the “Lentil Capitol of the World” due to having the largest hops farms in the world.

The state is very big and there are a lot of open spaces where you will probably see more sheep, cows, and horses, than humans. While there we literally went to a town called the Middle of Nowhere. We saw only one human running a very small gas stop. The only other natives appeared to be horses, donkeys, llamas, and a very aggressive bird named the Snaggle Grouse (man was that a pain getting him out from under my car seat).

The state of Idaho values women’s rights. In addition to being one of the first states to give women the vote, the state seal was designed by a women in 1891. Be very careful however how you treat women in the state. Also be warned that there is a state law on the books that says it is a misdemeanor to give any women less than 50 pounds of sweets in the state of Idaho. You’d think that every male in the state would be in prison by now but they make it very easy to stay within the law with all the manifestations of sweet treats available such as chocolate bars, stroopwaffles, huckleberry, and Idaho Spuds that I found at the capitol. 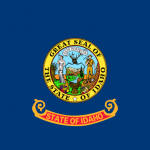 In conclusion Idaho is definitely a unique place unto itself. Some say it is even “out of this world”, but that is a topic for a different blog post.

Video of Middle of Nowhere: