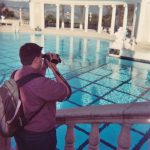 Me visiting the Neptune Pool in 2002.

OK, so when I was a kid my mom loved to go on road trips. Pretty much every other weekend we drove up and down the California coast line. There was always some general destination but the one rule was you had to stop at a historical plaque. There are a lot of historical plaques in California, so needless to say we saw a lot of things. 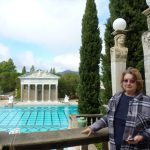 My mom at the Neptune Pool.
One day when I was about 12 years old we were driving along the 101 highway and my mom decided to stop to see Hearst Castle in San Simeon California. I remember taking the basic tour and seeing Hearst Castle and being completely blown away by it. Just like today the tour always starts at the Neptune pool and ends at the indoor Roman Pool. 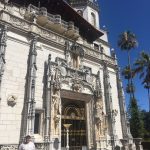 The face of the Casa Grande 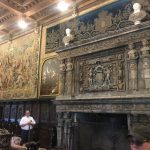 Inside the Meeting Room 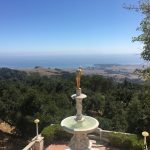 All the views at the castle are great. 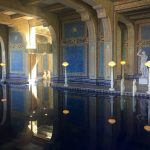 The inside Roman pool.

Hearst Castle was known to Mr. Randolph Hearst as La Cuesta Encantada, “The Enchanted Hill.” The name is very fitting because the location is magical. There is nothing like Hearst Castle anywhere in the world. It’s style and beauty were something that until the moment was nothing I could imagine. 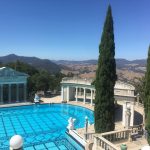 Stair View of the Neptune Pool

I remember very vividly the moment I saw the Neptune pool. It was what I like to describe as a mind expanding event. The Neptune pool is an amazing pool, up until the exact moment I walked up the stairs to see the pool for the first time I couldn’t imagine something like that existed. I remember being drawn to the water, it was like it called to me. The marble is so white and you are so high up the color comes out a very vivid blue. Of course as soon as I took a foot towards the pool I was immediately told to back off. It was clear, this was a place to look, not touch. Though still, it left an indelible impression on my mind that I never forgot.

The pool has haunted my mind for many years. And I have been back many times to the see the castle. I went there as part of my honeymoon to San Simeon and I remember taking my son to the castle when he was just three years old. I have seen the pool from many different angles on many different tours. Each time the tour started at the Neptune pool and each time I had to restrain myself from jumping in the pool.

Then one day I was watching this program called California’s Gold (https://vhost1.chapman.edu/watch_video.php?v=1405) that was on public television. And there was this reporter named Huell Howser. He went and interviewed several people at Hearst Castle, a very fascinating story, but then he did something crazy, he jumped in the pool! I am not a television personality but as soon as I saw that episode of California’s Gold, something snapped in me. I knew that if Huell Howser could get in the Neptune pool so could I. It was a kind of a crazy thought. I was not a television personality, I was not an employee of Hearst Castle, and I am not rich, but I am determined and so a goal was born. 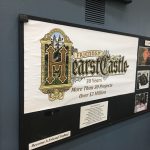 According to the video there were two ways to get into pool legally. One you could work for the castle or once a year you could go this fundraiser and make a bid for a pool party at Hearst Castle. Neither of those two options worked for me. I didn’t qualify for a job at Hearst Castle and I was not a member of the Friends of Hearst Castle, and even if I was, I doubt I could have won an auction.

So then I found out about another way to swim in the Neptune Pool. Basically if you became a volunteer at the castle for 50 hrs. you could go to an annual volunteer Neptune Pool party. This was going to be the route for me but for an unknown reason a few years ago they stopped the program. Then to make matters worse a report came out that after 80 years of continual use there was some cracks in the concrete. So they ended up draining all the water out of the Neptune pool. It looked like my dream of swimming in the Neptune Pool was going down the drain.

Those that are from California know that California has a strange magic to it’s place. In California you may be down but you are never really out as long as you have a bit of hope, it is the gas that keeps fueling the California Dream. It turns out that even though the California State Park system did have to drain the Neptune Pool, it was decided to completely restore the pool, right back to it’s original condition. The restoration took four years and $10 million dollars to complete. An article came out in the LA Times (https://www.latimes.com/travel/la-tr-travel-hearst-castle-pools-open-for-swims-20190613-story.html) that to celebrate the restoration and do some fundraising, the Friends of Hearst Castle decided to host some special pool parties. It wasn’t a cheap ticket, but I was fortunate to have some extra money saved up and it wasn’t something I had to spend a lot of time trying to decide. Which was good because there was only 40 tickets for each of the 5 dates, and the tickets went fast.

In order to get a ticket I had to become a member of the Friends of Hearst Castle. This group is dedicated to the preservation of Hearst Castle and also creates local education programs for Hearst Castle. As part of my membership I got three regular tours to the castle. I used them for my family and we all went out on a Grand Rooms tour. This tour was just like the one I was on when I was twelve. It starts at the Neptune Pool and then goes along the first floor rooms of Casa Grande (the Big House). After the tour was over we had time to go to the visitor center that had a little museum, a theater, a bookstore, and even a place where you could go and buy Hearst Castle Ranch Beef.

After the tour was over Denise and AJ went to the hotel and I stayed until 6:30 p.m. when we took a special bus back up to the top of the mountain. Along the way I was able to see Hearst castle and some Hearst zebras. Which was kind of premonition for the entire night that seemed surreal.

At the top of the mountain we briefly met with the Director of the Foundation. He was a nice guy that had this big Super Bowl ring. I didn’t get a chance to talk to him about it, but it was really big. He explained to us that part of the money being raised was going to local education programs. It was kind of nice to think that maybe one day some other kid might be inspired. 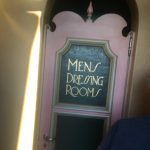 The entrance to the Mens Dressing Room. 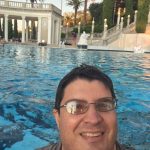 Selfie in the Neptune Pool. 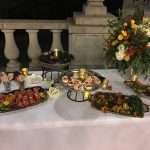 Some of the fancy food that was served. 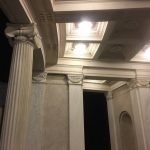 Julia Morgan knew her Roman architecture. You can see ionic, doric, and corinthian columns at the Neptune temple. 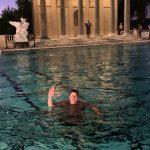 Swiming in front of the Neptune Temple. 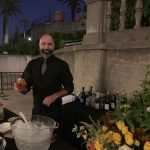 The bartender was very popular for the event.

To change into our swimsuits we were allowed to use the Hearst Castle changing rooms. The changing rooms are not on any regular tour so they are seldom seen. They have this nice green and gold motif. It is amazing to me how even in the changing rooms there was an attention to detail.

After finding a chair in which to put my stuff it was time to jump in. Most people jumped in, took a picture, and then got right back out. I am not sure why. The water was not cold, it was actually very refreshing, they told us it came from a mountain stream, no chlorine. Another reason I think people didn’t stay too long in the pool was that there was an open bar and lots of yummy hors d’oeuvres. But I wasn’t there for the food. I was there for the pool.

The evening was spectacular. The sunset from atop the mountain seemed endless and remember seeing the most beautiful purple sunset I have ever seen. I did eventually come out of the pool, my hands were very pruny but I was as happy as could be.

That night we stayed at the nearby Morgan hotel. It was named after the architect Julia Morgan who designed Hearst Castle. It was kind of expensive for us (we usually go to Motel 6) but it was cozy with an in-room fireplace. The decor was nice because the hallways had design sketches for Hearst castle. 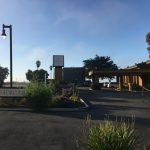 The Morgan Hotel was a nice coastal hotel. 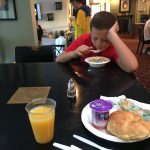 AJ having breakfast at the Morgan Hotel.

After all those many years dreaming about this pool it was truly an experience of a lifetime. It almost seams like it was nothing but a surreal dream but I have the pictures and memories for a lifetime to prove that it actually happened.